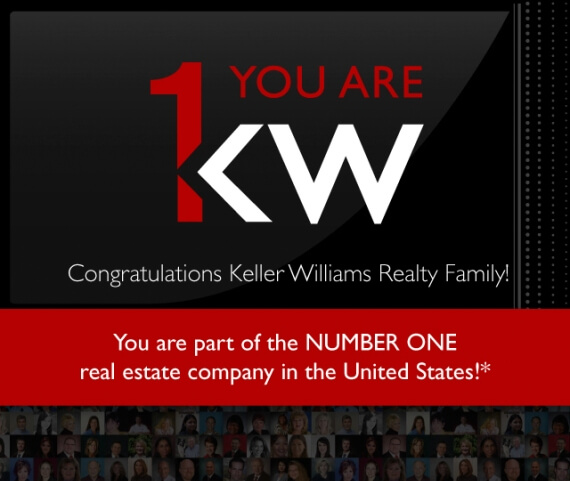 Keller Williams Is Now The #1 Real Estate Company In U.S!

DALLAS, TEXAS (February 17, 2013) — Keller Williams Realty, Inc. announced today that it is the largest real estate franchise company by agent count in the United States, with approximately 80,000 associates. In recent years, Keller Williams Realty has posted record growth numbers, surpassing RE/MAX, Century 21, and now Coldwell Banker to secure the industry’s top position. The news, based on publically available information as of February 6, 2013, was announced in front of more than 10,000 Keller Williams associates during the company’s annual convention in Dallas, Texas.

During his standing-room-only, annual State of the Company address, CEO Mark Willis made the announcement, stating, “Keller Williams associates: We are one family. We have one destiny. We share one thing…We are America’s #1 real estate company by agent count!”
Willis also reported strong productivity gains by Keller Williams associates in 2012. Year over year, per-agent units increased 23 percent, closed volume was up 31 percent, and gross commission income rose 28 percent. Moreover, a record 91 percent of the company’s offices were profitable for the year. The company also announced its final profit share total for the year, which added up to more than $55 million in profits distributed to Keller Williams associates – an increase of 44 percent over the previous year.
Keller Williams Realty President Mary Tennant updated attendees on the company’s charitable 501(c)(3) entity, KW Cares, which in 2012 awarded $2.7 million in grants to associates and their families in need.
And finally, Keller Williams Worldwide President Chris Heller announced plans to expand into two new regions: (1) Germany, Austria, and Switzerland; and (2) Turkey. The company previously announced global franchise agreements in Vietnam, Indonesia, and Southern Africa. Heller also extended a big welcome to more than 70 international guests who were visiting from 18 countries.
“One of the keys to Keller Williams Realty’s phenomenal success has been our ability to grow organically – from agent to agent, from market center to market center, from country to country – earning our reputation one person at a time,” Heller said.
Willis’ presentation was followed by a 30th anniversary party. The No. 1 announcement and celebration capped a remarkable year for the Austin, TX-based company:
Willis thanked associates and implored them to “Never back down” from their new position as the largest real estate company in the United States: “Let’s celebrate tonight, but watch out, competition. Tomorrow we’re going to be working harder than we’ve ever worked before. The real prize we’re pursuing is to be #1 in agent count and transactions and volume all across the world!”

*Disclaimer: Keller Williams received the highest numerical score among full service real estate firms for home buyers and home sellers in the proprietary J.D. Power and Associates 2012 Home Buyer/Seller StudySM. Study based on 2,994 total evaluations measuring five firms and measures opinions of individuals who bought or sold a home between March 2011 and April 2012. Proprietary study results are based on experiences and perceptions of consumers surveyed March-May 2012. Your experiences may vary. Visit jdpower.com

Learn from top Keller Williams Agents on how to build a Real Estate career worth having.